A stitch right side, a stitch wrong side, and we repeat ... Favorite activity of grandma a few years ago, knitting is now unanimous among men, as well as younger generations, to the point of becoming a star activity on social networks. Explanations. 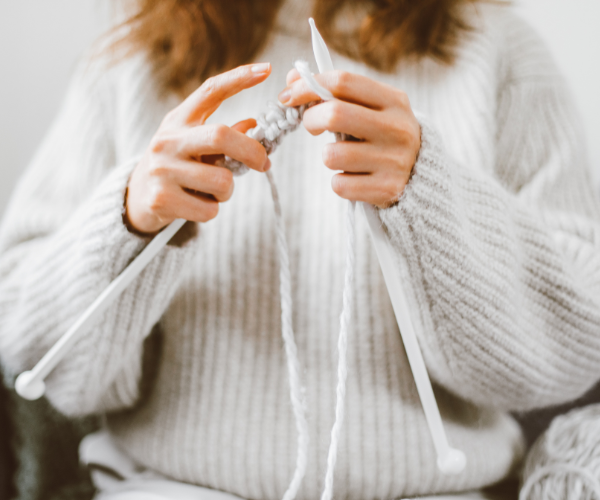 No, knitting is not - or no longer - reserved for seniors! Let's face it, the image of this centuries-old technique has been dusted off for a few years now to impose itself on the younger generations, but not only... A study conducted by Opinion Way for PP Yarns & Co*, revealed last September, proves that knitting is trendy, and this with new targets, including men and generations Y and Z. In detail, more than a third of the under 35s (34%) claim to knit today, as well as 32% of the men. These figures show the growing popularity of this practice since the beginning of the pandemic. The proof is that knitting is becoming a strong trend on social networks, starting with TikTok, a social media popular with the younger generation. The hashtag #knitting has generated no less than 1.8 billion views on the Chinese social network, and that's without counting its dozens of variations, most of which have several million views. There are videos of users simply filming themselves knitting, challenges, clothes and objects made by hand using the knitting technique, and even more tips and tutorials. So many videos that testify to the desire of young people to engage in manual activities with, according to users, objectives as diverse as varied.

If we can understand why the average person started knitting again during the pandemic - and by that we mean the confinements - we can however wonder what allowed the practice to last beyond the health crisis. According to the survey presented by PP Yarns & Co, knitting is a source of well-being, relaxation, and even disconnection. More than three-quarters of respondents (76%) say it is a relaxing activity, while nearly two-thirds (63%) go so far as to say it has a positive impact on their health. Given the rise in anxiety disorders among the younger generation, this return to knitting may be seen as timely.

But knitting also appears as a response to certain environmental issues, especially in the field of fashion. For more than three quarters of the French (77%), knitting is beneficial for the environment. A reason that pushes young people in particular to take up knitting, since 36% of respondents under 35 years old consider that the "environmental appeal" of knitting is particularly important. A handful of respondents go even further by affirming that "knitting limits the production and purchase of new clothes and allows us to return to a shorter circuit and to limit over-consumption behaviors" (22%).

Knitting is accessible to all

If learning to knit used to be passed down from one generation to another, it is now very easy to learn the technique, with dedicated accounts multiplying at high speed on social networks. One of the best known is the brand We Are Knitters, followed by more than 700,000 followers on Instagram, which offers wool, kits, and patterns, but also tips and tricks to learn the basics of knitting. All this is punctuated by the achievements of enthusiasts, amateurs, or beginners in knitting.

But social networks have also seen the emergence of a lot of influencers, collectives, and other knitting brands, determined to share their know-how - and their passion - to as many people as possible. This is the case of Alice Hammer, Wool And The Gang, In The Wool For Love, Trendy Tricot, or Mademoiselle Quincampoix, among others, who all have tens of thousands of subscribers. This is a time when knitting could well become one of the most popular activities, and this for good.